Heart disease, kidney disease, heart failure and stroke, are some of the leading causes of death worldwide. High blood pressure is one of the leading risk factors for the development of these conditions.

Blood pressure medicine works well and gets the job done, but does it necessarily attach the root of the problem? No matter how safe these drugs may be, all drugs have some unwanted side affects and cons.

One of my favorite super foods has to be blueberries. They may be tiny, but they're packed with flavor and act as one of the best blood pressure fighting foods in the world.

Blueberries are rich in flavonoids, which one study found may prevent hypertension and help naturally lower blood pressure.

In a large study of more than 34,000 people with hypertension, the subjects who had the highest intake of anthocyanins from berries had an 8 percent decrease in risk for hypertension. [1]

Maintaining low sodium levels is essential to keeping blood pressure at a healthful level. Blueberries are free of sodium.

Did you know? Native Americans used blueberry leaves and roots for medicine, and used the fruit as a fabric dye. [4] 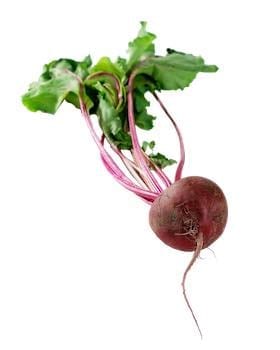 Growing up I was always told that beets are good for me but I never listened because they didn't taste yummy to me at the time. Now that I'm a bit older I like to put beets on salads and occasionally I drink beet juices.

Why are beets good to eat

Beets have among the highest nitrate contents of all vegetables. Studies have shown that consuming foods that are high in nitrates help the body create more nitric oxide. Nitric oxide is said to help open your blood vessels and help lower blood pressure. One study also showed that nitrates present in beetroot juice lowered blood pressure within just 24 hours.

Another study which was done in 2015 found that people with high blood pressure saw it reduced when they consumed 250ml of beet juice every day for four weeks. [2]

Note: Blood nitrate levels remain elevated for about six hours after eating dietary nitrate. Therefore, beets only have a temporary effect on blood pressure, and regular consumption is required to experience long-term reductions in blood pressure. [2]

Other benefits of eating beets:

How to use beets: 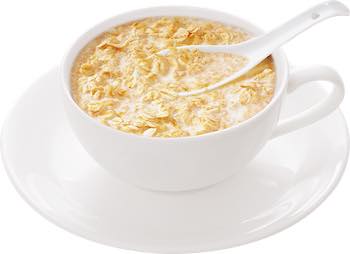 Oats are a great source of nutrients and are one of the healthiest grains on earth! They are gluten free, whole grain and packed with vitamins, minerals, fiber and antioxidants. Studies have shown oats and oatmeal to have many health benefits which include but aren't limited to: lowering blood pressure, weight loss, lowering blood sugar levels, reducing risk of heart disease.

Whole oats are rich in an antioxidant plant compounds called polyphenols. The most notable antioxidants are called avenanthramides, which are almost elusively found in oats. [6]

Overnight oats: Soak 1/2 cup of rolled oats and 1/2 cup of your favorite nut milk in a mason jar. In the morning, stir your oatmeal and add your favorite berries, granola, and a little bit of cinnamon to taste.

The health benefits of beta-glucan fiber include: 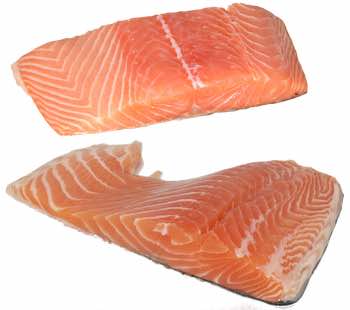 Omega-3 fatty acids are an essential nutrient that is key when it comes to preventing and managing heart disease, and other diseases.

Fish like mackerel and salmon are high in omega-3 fatty acids, which along with lowering blood pressure can also help reduce inflammation, and lower triglycerides.

Quick recipePlace a fresh, organic fillet of salmon in parchment paper and season with herbs, lemon, and olive oil. Bake in a 450°F oven for 12-15 minutes.

Other benefits of omega-3 fatty acids: 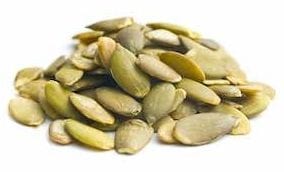 Unsalted seeds are high in potassium, magnesium, and other minerals known to reduce blood pressure. Enjoying a ¼ cup of pumpkin, sunflower, or squash seeds as a snack throughout the day is a healthy alternative to chips or other processed snacks.

A 12-week study in 35 postmenopausal women found that pumpkin seed oil supplements reduced diastolic blood pressure (the bottom number of a reading) by 7% and increased "good" HDL cholesterol levels by 16%. [8]

Did you know?The high zinc content of pumpkin seeds may help improve sperm quality and fertility in men.

Other studies suggest that pumpkins’ ability to increase nitric oxide generation in your body may be responsible for its positive effects on heart health. [9]

Other benefits of pumpkin seeds 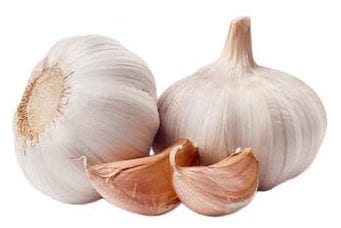 Garlic is a natural antibiotic and anti-fungal food. Its main active ingredient, allicin, is often responsible for associated health benefits. [11]

Some research suggests that garlic increases the body's production of nitric oxide, which helps the smooth muscles to relax and the blood vessels to dilate. These changes can reduce hypertension.

There was a study performed that stated that garlic extract reduced both systolic and diastolic blood pressure in people living with hypertension. [12]

Another study published in 2014 found that garlic has the potential to lower blood pressure similarly to the effects of prescribed blood pressure medicine. This study further shows that the polysulfides present in garlic help promote the opening of blood vessels and, therefore, blood pressure reduction. [13]

Quick tipUse garlic instead of salt to further promote the health of your heart.

Other benefits of garlic 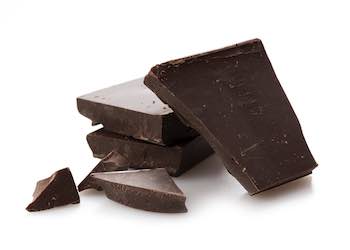 Dark chocolate contains more than 60 percent cocoa solids and has less sugar than regular chocolate. You can add dark chocolate to yogurt or eat it with fruits, such as strawberries, blueberries, or raspberries, as a healthy dessert. 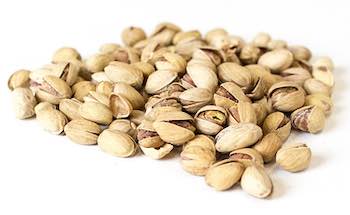 Pistachios are a healthy way to decrease blood pressure by reducing peripheral vascular resistance, or blood vessel tightening, and heart rate. One study found that a diet with one serving of pistachios a day helps reduce blood pressure.

You can incorporate pistachios into your diet by adding them to crusts, pesto sauces, and salads, or by eating them plain as a snack.

Olive oil is an example of a healthy fat. It contains polyphenols, which are inflammation-fighting compounds that can help reduce blood pressure.

Olive oil can help you meet your two to three daily servings of fat as part of the DASH diet (see below for more about this diet). It’s also a great alternative to canola oil, butter, or commercial salad dressing.

Pomegranates are a healthy fruit that you can enjoy raw or as a juice. One study concluded that drinking a cup of pomegranate juice once a day for four weeks helps lower blood pressure over the short term.

Pomegranate juice is tasty with a healthy breakfast. Be sure to check the sugar content in store-bought juices, as the added sugars can negate the health benefits.

If you like kiwis you’re in luck. Kiwis are rich in lutein, a powerful antioxidant that fights the free radicals that can cause high blood pressure. Kiwis are also high in potassium which, as we have seen, can help lower blood pressure by relaxing the blood vessels and flushing the body of sodium.

In a study involving 118 people with moderately high blood pressure, subjects were given either 3 kiwis or an apple a day. After 8 weeks, the people in the kiwi group had lower systolic and diastolic blood pressure than the control group.

Kiwis also contain vitamin C, which is known to reduce blood pressure due to its antioxidant properties. The recommended daily intake of vitamin C to reduce hypertension is 500 milligrams a day.

Studies have shown that watermelon can help reduce the symptoms of hypertension. Scientists think this is because watermelon contains citrulline, an amino acid that promotes the production of nitric oxide. Nitric oxide relaxes blood vessels and arteries, making it easier for your blood to flow.

In a study reported in the American Journal of Hypertension, subjects who took watermelon extract for six weeks saw a reduction in their blood pressure.

Watermelon can be easily incorporated into your diet as a refreshing snack or drink. It can be added to salads or even consumed as a chilled soup.

The results of animal studies suggest that pulses such as lentils could block age-related hypertension and even reverse changes in blood vessels that are a result of high blood pressure. This is probably because of their antioxidant properties and high-fiber content.

Human studies are needed to determine just how effective pulses are in the reduction of blood pressure levels.

Nutritionists recommend that everyone over the age of 14 should eat 1 and a half cups of beans, peas or lentils a week.

Lentils can be consumed in soups or used to replace meat in burgers and pasta sauces.

There’s nothing quite like a good cup of tea.

The results of a study published in the Journal of Nutrition found that drinking three cups of hibiscus tea a day for six weeks reduced the blood pressure of people with mild hypertension.

Hibiscus tea contains the antioxidants polyphenols and anthocyanins, which are known to reduce blood pressure.

While some foods may relieve hypertension, others can cause substantial increases in blood pressure.

People can prevent or reduce high blood pressure by avoiding the following:

Sodium can significantly raise blood pressure. According to the findings of a review from 2013, lowering salt intake by 4.4 grams daily substantially reduced systolic and diastolic blood pressure.

The caffeine in coffee, tea, cola, and energy drinks can cause short-term spikes in blood pressure.

A review of five trials found that drinking up to 2 cups of strong coffee can increase both systolic and diastolic blood pressure for 3 hours after consumption.

These findings do not suggest that coffee increases blood pressure or the risk of cardiovascular disease in the long term.

Consuming moderate amounts of red wine may have some health benefits, but larger amounts of alcohol can cause dramatic increases in blood pressure.

Scroll back to top